Walton Ford on Art and Illustration

Ford said that he was interested in fudging the line between art and illustration; a lot of great art was illustration, and vice versa, depending on the degree of skill and imagination the artist brought to it. But there was another factor, too, and it involved the viewer's participation. "Norman Rockwell wanted to tackle civil rights," Ford said. "So what does he do? He does a painting from the point of view of a little black girl in a perfect Sunday dress, and there's a tomato splashed on the wall right near her head, and two U.S. marshals' legs on either side of her, and you have only one place to go - you're stuck with Norman Rockwell's interpretation. Some people love it, because you're off the hook, everyone understands it right away. Illustration can be a starting point, but to become art it has to open up and allow for other interpretations - then you get the kind of work I love most."

from "Man And Beast: The narrative art of Walton Ford" by Calvin Tomkins
The New Yorker, January 26. 2009 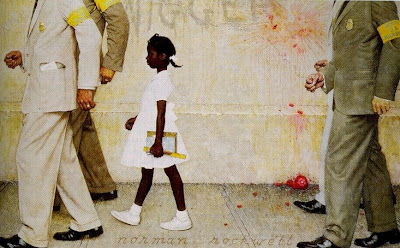 Norman Rockwell, "The Problem We All Live With"
Posted by Ron Reed at 8:44 AM

Balanchine: Only God, Only a Flower 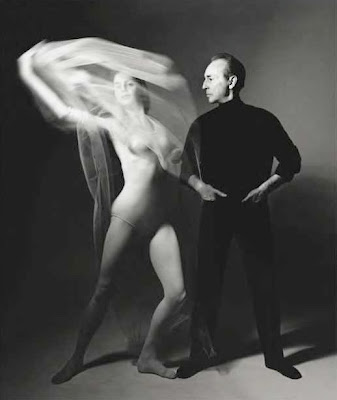 One of the most celebrated Banachinisms, "God creates, man assembles," is an adaptation of a saying attributed to Glinka, "Nations create music, composers only arrange it," and it is a question whether Balanchine or Stravinsky said it first. The word "assmelbe" is a synonym for "compose," which literally means "put together." Balanchine was speaking not only for composers and choreographers but for all "creative" human beings. We put things together that already exist; we cannot creat out of nothing - only God creates ex nihilo. It is the thought expressed in John 1:3: "Without Him was made nothing that has been made."

In countless interviews, Balanchine deplored the tendency of some members o f the audience to attach meanings to dance gesture, and he always used the same metaphor: "When you have a garden full of pretty flowers, you don't demand of them, 'What do you mean? What is your significance?' Dancers are just flowers, and flowers grow without any literal meaning, they are just beautiful. We're like flowers. A flower doesn't tell you a story. It's in itself a beautiful thing."

These statements were all loose renderings of the Acmeist manifesto, one of the prime documents of Russian symbolist poetry. The Acmeist poets rebelled against the previous generation's use of prepackaged symbolism. Sergei Gorodetsky, 1913: "For the Acmeists, a rose has again become beautiful in itself, for its petals, fragrance, and color, and not for its purported likeness to mystical love or something else."