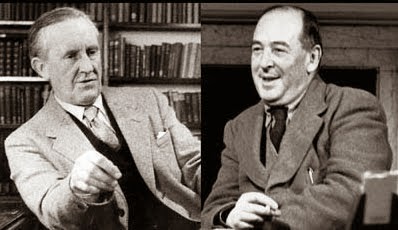 The English Faculty meeting began at 4:00, May 11, 1926 at Merton College, Oxford. The previous year, Tolkien had been appointed Professor of Anglo-Saxon at Pembroke College, and Lewis had been elected a Fellow and Tutor in English Language and Literature at Magdalen College.

It was heady stuff; a proposal to co-ordinate lecture schedules with tutorials, the need for lessons in pronunciation and beginners' outlines of literature. Lewis wrote in his journal that "Tolkien managed to get the discussion round to the proposed English Preliminary examination."

The two men spoke after the meeting. "He is a smooth, pale, fluent little chap – can't read Spenser [Lewis' favourite author] because of the forms.... Thinks all literature is written for the amusement of men between thirty and forty.... No harm in him: only needs a smack or two."

Before long, Lewis was attending "The Coalbiters," a weekly study group Tolkien had initiated earlier in the year to read aloud from Icelandic sagas and myths in the original languages – something of a precursor to the Inklings, I suppose. A year later Lewis wrote to his friend Arthur Greeves, "We have so far read the Younger Edda and the Volsung Saga: next term we shall read the Laxdale Saga. You will be able to imagine what a delight this is to me, and how, even in turning over the pages of my Icelandic Dictionary, the mere name of god or giant catching my eye will sometimes throw me back fifteen years into a wild dream of northern skies and Valkyrie music." This experience of "northernness" was at the centre of Lewis' spiritual longing – the "joy" in his spiritual autobiography "Surprised By Joy" – which flowered into faith between 1929 and 1931, Tolkien playing a critical role.

Tolkien's passion for Nordic myth fueled a mostly secret project, the creation of complete histories, languages and geographies of the world which eventually became the setting of his Middle Earth stories. The summer of 1926 – within months of meeting Lewis – is the earliest possible occasion on which Tolkien may have scrawled the words "In a hole in the ground there lived a hobbit" on the back of a student examination paper, though it is more likely to have been two or three years later. By November 1929 the two men were meeting together regularly, talking well past midnight about "the gods and giants of Asgard."  On December 6, 1929, Lewis read Tolkien's "Lay of Leithien," the essential story of The Silmarillion – perhaps the first Middle Earth story Tolkien shared.

In February 1933, Lewis read the mostly complete first draft of The Hobbit, and it is likely that The Inklings were begun in the fall of that year. By December, Lewis's brother Warnie writes in his journal that he sees less and less of his brother every day because of the friendship with Tolkien.

Because Tolkien's journals are not readily available to scholars, we don't know that date of the following entry, but likely soon after the famous Addison's Walk conversation of September 19, 1931. "Friendship with Lewis compensates for much, and besides giving constant pleasure and comfort has done me much good from the contact with a man at once honest, brave, intellectual - a scholar, a poet, and a philosopher - and a lover, at least after a long pilgrimage, of Our Lord."
Posted by Ron Reed at 11:22 AM