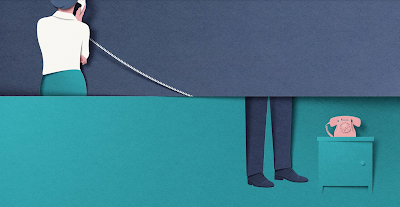 Perhaps you’ve experienced something like this cycle of emotions recently. This morning, as I woke up after a few days of isolation, dread, and an incipient sore throat—all of which resulted in an unpleasant stupor of “Dateline,” napping, wall-staring, and phone Scrabble—I put my feet on the floor and said to myself, Today is going to be different! I marched determinedly about my apartment, tidying, making coffee, preparing to work, listening to podcasts. I felt somewhat optimistic. But soon I had tears in my eyes, because I was listening to the news. (It was Tuesday’s stellar episode of “The Daily,” in which Michael Barbaro talked to Dr. Fabiano Di Marco, the head of the respiratory unit of a hospital in Bergamo, Italy. “It’s like a war,” Di Marco said.) But my goal, in addition to staying informed, was to be productive, and that would require avoiding my stupor. So I took my own advice from the piece I was trying to write: I called a loved one on the phone.

I picked up my landline—yes, landline—and called Janet, my late mother’s best friend, a retired music teacher who lives on Cape Cod. Janet had e-mailed to see how I was doing during social isolation, decorating her message with shamrocks and kissy-face emojis. It was a great e-mail, but I wanted to hear her voice. “Sarah!” Janet said. She was smiling—I could hear it. “Let me put down my chanter.” She was practicing her bagpipes; it was St. Patrick’s Day, in the time of the coronavirus, and she was preparing for a one-woman parade. “I’m going to play ‘The Minstrel Boy’ and march down the street,” she said. “I’ll send you a video.” Talking to Janet, I could hear the amusement and energy in her voice; she’s always ready to laugh, even now, and she’s always up to something. She talks in vivid anecdotes. We caught up, gossiped, railed against political incompetence, laughed our heads off. Hanging up, I felt more alive.

I’ve wanted to write for a long time about the particular joy of talking on the phone. Not video chat, though that has its charms. (Among them, this week: virtual coffees and cocktail hours, Zoom meetings, seeing how your parents look, saying hi to your favorite rambunctious little kid.) But for sheer connectedness, the phone has something other forms of communication don’t. For the past few years, I’ve harbored a secret theory—that our love of the intimacy of podcasts, of the near-startling pleasure of curling up with the immediacy of a human voice in our ears, is connected to our loss of that pleasure from talking on the phone. People too young to have grown up doing so tend not to get why you would do it at all. Suggesting a phone call gets a laugh; saying that you have a landline gets a polite, reeling covering-up of something like pity. (A friend of mine, a few years ago, called his younger date, after some cumbersome texting, to sort out meetup logistics. She was freaked out. A phone call? “That’s what my dad does,” she told him. Then he was freaked out.)

In any case, I get it. Messaging has overtaken phone calls for good reason—convenience, desirable asynchronicity, privacy, a certain respecting of boundaries. When you’re using your phone primarily as a screen, flipping between, say, Twitter, Scrabble, Overcast, Instagram, the weather, your camera, a document, Google Keep, and the neurotic bunch of timers you keep for yourself to try to impose structure on your day (or maybe that’s just me), having your phone suddenly come alive, vibrating, making noise, being overtaken by the name and image of a gabby relative—in short, turning into a phone—can be jarring. (Aaah! What are you doing here?) Suddenly, this person is in your house. Beyond that, phone calls now tend to take place over crappy-sounding technology—tinnier, spottier, less reliable than during the golden era of the phone gab. It may be hard to remember, under those circumstances, the appeal.

But we all know, instinctively, about the power of the human voice. You may even have voice mails, left years ago, that you’ll never delete. I have them from loved ones who have died—the “Hello, dear!” of my Aunt Adelle, the mile-a-minute thinking aloud of my friend Michael. (“I kind of feel like we’re dealing with ethics, and I hate dealing with ethics. Call me back, bye.”) Think of the recent videos from Siena and Wuhan, in which people sing or call out, connecting from windows and balconies during social isolation, across distance, à la the twilight bark in “101 Dalmatians.” This week, I’ve been doing that with relatives I’ve loved all my life but haven’t caught up with in a while, their distinctive voices coming to me from Santa Barbara, Lubbock, Memphis, Hartford, Barre. And I’ve been doing it with people across town.

The phone calls have reminded me, with new clarity, about the things that are expressed in tone, beyond words. Last night, I listened to a younger co-worker friend tell me a story he’d planned to share over a drink, about a burial he’d arranged for an elderly friend who’d died. As he described the series of kindnesses he’d encountered—of a city worker, of volunteers at a Jewish service organization, of the men in the minyan who came to the burial—I could hear a whole bouquet of notes: amazement, respect, quiet gratitude, affection, his own understated kindness. Before we hung up, I told him I was glad to know him. A couple of hours later, he called again, for a different kind of bonding: out for a walk on the deserted night streets, he’d accidentally kicked a rat. Now he needed someone to shudder with. “It was soft,” he said. We recoiled together, noisily commiserating. Then, hoping to consolingly redirect the rat energy, I told a story about a time when I’d made a yowsers connection myself: scurrying down Mulberry Street, past a gesticulating anecdotalist, I inadvertently caused my own groping. (“Was it as good for you?” the startled man called after me.) Roaring about the surprising little revulsions of New York City streets—all our shared notes of surprise and hilarity and empathy and horror—is exactly the stuff of a good gab. And when you’re living in isolation, it’s reassuring to make some noise.

If you’ve fallen out of the habit, or never had it to begin with, here’s what to do. First, find the best equipment you can: ideally, a real phone. A landline is optimal, or a cell phone with decent audio, held right up to your ear. Avoid the diffuse echoey sadness of the speakerphone, the vulnerable voice bouncing around an open room or, God forbid, an open car. No screens, no juddering technology or buffering, no contending with the distracting horror of your own disembodied face. Just voice: mind meeting soul meeting timbre. Don’t have a TV on; don’t have a laptop in front of you. Sit in a favorite chair and look at your plants and your books. They are beautiful. Look out the window, the trees outside. Listen to your friend.

Second: the friend. The right friend. A good-laugher friend, a pal-around friend, a rollicking-bear-hug friend. Often, at the beginning of a really good phone call, my best friends and I do a little joyous hollering—ha-HA! There you are! It’s good to hear you!—to voice, in brouhaha form, the happy relief of being together. (The older I get, and the more complicated hanging out with my friends has become, that kind of togetherness feels like a gift.) Usually, these conversations, these in-cahoots, let-it-all-hang-out gabfests, feel like an illicit stealing away of time: a pleasurable combination of life-strategizing and zingers with my friend in L.A., who’s driving through traffic or navigating Gelson’s; or with the friend in Riverdale, who’s walking her lovable three-legged dog; or with the one in Manchester-by-the-Sea, who’s sneaking out to go night-surfcasting after her kids are asleep. Now we’re all in our houses and apartments, trying to stay sane.

That’s it. Find a good phone, focus, and be together. It will do you some good. On the phone, you’re not performing for a camera, or observing your friend and their house. You’re not typing. You can get to essentials with a different, more human part of your brain. At work a week or two ago, we got certain things done efficiently because of conversation. Now, working remotely, a similar efficiency, involving tone, back-and-forth, joking, and brainstorming, can happen on the phone. Boring things are best handled electronically; complex, more abstract things, involving ideas or problem-solving or solace, are better handled with the nuance of voice. People who grew up in a phone-centric age—being fourteen, say, and lugging a rotary phone with a curly cord into a bedroom and closing the door, working up the nerve to call a cute boy, talking to his mother first—understand the phone’s particular immediacy very well. For decades, the phone company’s jingle was “Reach Out and Touch Someone.” Now, for a while, it’s the safest—and best—way to do it.

And here's another article that talks about some of the same things
Psychology Today
Why Video Chats Are Wearing Us Out,
by Doreen Dodgen Magee
Posted by Ron Reed at 10:26 PM