found poem 2016 | assembled from the pages of the new yorker 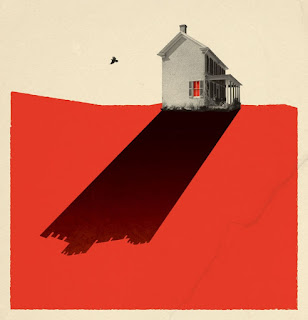 Other people's minds are a foreign country
in which we're guests, tourists, or strangers,
unsure where we are and what's expected of us.
People say things that they don't mean literally:
"Someday I am going to get my eyes open all the time
and then I will eat you and Lizzie both."
They tell jokes and they use ironic expressions:
"Make it extremely squalid and moving.
Are you at all acquainted with squalor?"

He'd had enough of what people said,
tips and tales, theories, tidbits.
If he could have it his way,
nobody would ever say anything again.

Once,
looking through this garbled, pearly whorled window,
he'd pulled a seven-foot coil of ingrown hair from an abscess
on the tip of a patient's tailbone,
theatrically slipping sleeping pills
into their tea,
a cluster of pastel plaster.

He was not well behaved in the girlfriend situation.
Unsuitability, resistance, seduction,
failure of imagination,
failure of courage,
bad planning,
incompetence,
corruption,
fecklessness,
the laws of nations,
the laws of physics,
the weight of history,
inertia of all sorts;
like an exotic dancer at a trustee's meeting.