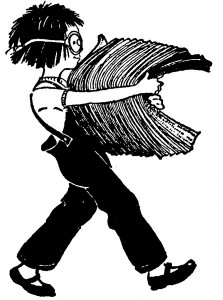 The wood-panelled tailgate of the 1972 Oldsmobile station wagon dangled open like a broken jaw, making a wobbly bench on which four kids could sit, eight legs swinging. Every Sunday morning, long before dawn, we’d get yanked out of bed to stuff the car’s way-back with stacks of twine-tied newspapers, clamber onto the tailgate, cut the twine with my mother’s sewing scissors, and ride around town, bouncing along on that bench, while my father shouted out orders from the driver’s seat. “Watch out for the dog!” he’d holler between draws on his pipe. “Inside the screen door!” “Mailbox!” As the car crept along, never stopping, we’d each grab a paper and dash in the dark across icy driveways or dew-drunk grass, crashing, seasonally, into unexpected snowmen. “Back porch!” “Money under the mat!” He kept a list, scrawled on the back of an envelope, taped to the dashboard: the Accounts. “They owe three weeks!” He didn’t need to remind us. We knew each Doberman and every debt. We’d deliver our papers — Worcester Sunday Telegrams — and then run back to the car and scramble onto the tailgate, dropping the coins we’d collected into empty Briggs tobacco tins as we bumped along to the next turn, the newspaper route our Sabbath.

After we’d shoved the last, fat Worcester Sunday Telegram inside the last, unlatched screen door, we’d head home, my father taking turns a little too fast, so that we’d have to clutch at one another and at the lip of the tailgate, to keep from falling off. “Dad, slow down!” we’d squeal, not meaning it. Then he’d make breakfast, hot chocolate with marshmallows in the winter, orange juice from a can of frozen concentrate in the summer, and on my plate I’d make wedges of cantaloupe into Viking ships sailing across a sea of maple syrup from the Coast of Bacon to Pancake Island. After breakfast, we’d dump the money from the tobacco tins onto the kitchen table and count coins, stacking quarters and nickels and dimes into wrappers from the Worcester County Institution for Savings, while my father updated the Accounts, and made the Collection List.

Going collecting was a drag. You had to knock on people’s doors and ask your neighbors for money — “Telegram! Collecting!” — and it was embarrassing, and, half the time, they’d ask you in, and before you knew it you’d be helping out, and it would take all day. “So long as you’re here, could you hold the baby while I take a quick shower?” “Honey, after this, could you bring my mail down to the post office on that cute little bike of yours?” I came to understand that the people who didn’t leave the money under the mat hadn’t forgotten to. They just liked having a kid visit on Sunday afternoon.

The death of a newspaper is sometimes like other deaths. The Mrs. and the Miss, a very, very old woman and her very old daughter, lived in a crooked green house on top of a rise and wore matching housecoats and slippers. The Miss followed the Mrs. around like a puppy, and, if you found them in the parlor reading the paper, the Mrs. would be poring over the opinion pages while the Miss cut pictures out of the funnies. “The Miss can’t think straight,” my father said. “Her head’s scrambled. So be gentle with her. Nothing to be afraid of. Be sure to help them out.” Once when I biked over there, the Miss was standing, keening, noise without words, sound without sense. The Mrs. wasn’t moving, and she wasn’t ever going to move again. I called for help and held the Miss’s hand, waiting for the wail of sirens. I didn’t know what else to do.


excerpted from "Does Journalism Have A Future" by Jill Lepore
The New Yorker, January 28, 2019
Posted by Ron Reed at 4:04 PM