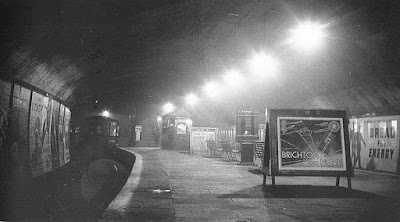 I saw Shakespeare
In a Tube station on the Central London:
he was smoking a pipe:
He had Sax Rohmer's best novel under his arm
(In a cheap edition)
And the Evening News.
He was reading in the half-detached way one does.
He had just come away from an office
And the notes for The Merchant
Were in his pocket,
Beginning (it was the first line he thought of)
'Still quiring to the young-eyed cherubins',
But his chief wish was to be earning more money.


A poem by Charles Williams, written around 1930, quoted in Humphrey Carpenter's book on the Inlkings. A drastically different style from the Arthurian poems I know him for. I like this one.
Posted by Ron Reed at 5:58 PM