Abbas Kiarostami, "The Job Of A Filmmaker" 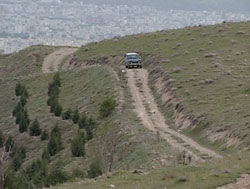 I don’t believe the job of a filmmaker is to excite or move the viewer merely through creating special moments. By simply showing the reality, one can make people think about their own and other people’s acts or behaviour, and see and accept reality as it is. It’s from this point that the viewer’s duty to complete a work or a film begins. The viewer must be enticed into reflection on himself and the surrounding world. The combination of the filmmaker’s and viewer’s mind creates a film which will be more durable, original and fruitful than a film which merely aims at telling a story and impressing the viewer.

In many films, music aims at giving viewers guidance or imposing something on them. Be happy here. Be sad here, scared here, moved there. It’s as if the director is standing by the screen like a conductor, calling on the audience to show their feelings. And the more worked up the audience gets, the more the director gets excited. “I can keep the viewers on the edge of their seats!” But I don’t know how necessary it is to take the viewers hostage. These days technology also helps such hostage-taking with Dolby surround sound systems and other new things. I don’t know how far this game of intimidating poor viewers will go.

Cinema is really a wonderful thing. Any viewer sitting in a seat in a dark movie theatre is turned into an innocent child. And there’s nothing quite as magical as light and darkness. It can send viewers into raptures. Under the circumstances, I suppose this is akin to picking pockets in the dark. By captivating the viewer, we rob him of his reason, which is even worse than emptying his pocket.

What I’m saying is not against music, nor am I against the appropriate use of music in cinema. I’m talking about abusing music.

I don’t believe a film is to be understood. Do we understand a piece of music? Do we understand a painting, or the exact meaning of a poem? It is ambiguity that attracts us to a work, not understanding the subject or story. However, human beings are standing between heaven and hell because of their existential ambiguity, and art displays this ambiguity. Pascal, a French philosopher, said that you cannot show a single event in somebody’s life and claim to have said everything about him. The secret department of the soul prevents this, and this is what becomes the plinth, the basis of the art of cinema.

I believe we can make the viewer experience mental effort by using omission. He can become involved in the making of the film through his imagination. For the creative viewer, this involvement is more involving than false climaxes or the playing of ridiculous guessing games. Once again I would like to quote Bresson, who said “We create not by adding but by subtracting.” This is exactly the opposite of resorting to symbols, allegories and signs.