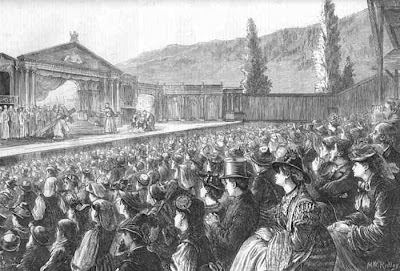 The history of Sweden records a very extraordinary incident, which took place at the representation of the Mystery of the Passion, in the presence of King John II of Sweden, in 1513. The actor who performed the part of Longinus, the soldier who was to pierce the Christ on the cross in the side, was so transported with the spirit of the action that he really killed the man who impersonated Our Lord; who, falling suddenly and with great violence, overthrew the actress who represented the Holy Mother.

King John was so enraged against Longinus that at once he leaped on the stage, and struck off his head. The spectators, who had been delighted with the too-violent actor, became infuriated against their King, fell upon him in a throng, and killed him.
Posted by Ron Reed at 9:40 PM