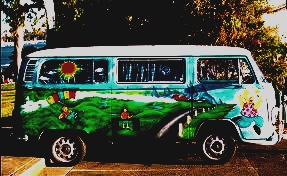 It may surprise people that I once was a neo-hippie, much affected by the writings of Gandhi, Henry David Thoreau, Dorothy Day, and Jesus. At least it may surprise you (as it does my wife) that I also once had a full head of hair. This was a while ago when I was 20 years old and spent my time grappling with how to live the gospel in a radical way in a modern and western life.

In other words I had no job and attended a small Christian Liberal Arts College.

I obtained the requisite VW camper van, painted it with rolling green hills, a blue sky, clouds, sun, and various radical quotes and a jesus fish; I played guitar; I lived in the bad part of town where rent was cheap. Pretty standard Midwest stuff.

I tell you all this to set the stage for a Christmas memory that took place at this time in my life. On this particular Christmas my desire to get to the marrow of every experience and to follow the gospel as best I could was burning like a fire. At the time my three older brothers all had new families with which to spend Christmas, and my parents had to spend Christmas at the Church where my father was minister. These Christmases were not attractive to me, being either about children, which I didn’t have, or about work with sermons to give and carol sings to attend. So I chose to make my own way and to spend Christmas on my own, in my rented house, reading the Bible and praying.

I forgot to mention how pious I was.

The house where I chose to spend Christmas was an old wooden house that housed seven of us comfortably. On Christmas day, of course, all of my housemates were with their families. They had all reacted as my family had to my desire to be alone – with disbelief and with some hurt when I declined their invitations to join them at their own celebrations.

On that day, I woke up alone in a that big, empty house. I don’t remember what I had for breakfast, but I do remember drinking coffee and reading the gospel accounts of Jesus’ birth, sitting swaddled in my sleeping bag (it was a cold house). I took my time reading, no doubt also smoking a cigarette or two. The thing is, though, that it didn’t take too long. I had no distractions, no family pictures or squabbles, no unwrapping to do, so before long I grew a bit bored. I then drank a Christmas beer, which I was pretty sure fit with the piety as monks brewed and drank beer. At least Martin Luther did, and he was the monk that counted in my tradition.

Sometime soon after I had the idea that I should sing and record some Christmas hymns – which I began to do on the four-track recorder that I had received for Christmas the previous year. I got fully involved in this project, and recorded a version of “Silent Night” in five part harmony – all the voices my own, all the harmonies written on the fly.

When I had finished Silent Night, I began to feel a little lonely. I wanted to share my song with someone. I had contemplated Christmas, but I was ready to now share Christmas. At this point my housemate Marcus came home with a plate of Christmas food he had taken from his parents house for me. Soon after our friend Josh showed up with the same, and we had a feast. I played them my song. The light was rosy and the cheer was good.


*
I did not think about this Christmas for a long time. It was one that was both full and lonely. Looking back I realize that while my intentions were good, I almost missed the point of Christmas – life. The coming of Jesus means many things, but most of all it means that we have hope in life. It means that we are not alone, that there is a God, and that God loves us. It means that we have reason to rejoice, that we have reason to connect and rejoice with the other. While there is a time for solitude, meditation, and prayer, Christmas is not properly celebrated this way. The birth of Christ was not a solitary affair. Not only was there a mother and child, but there was a father, there were animals, there were shepherds, wise men, angels – and the list might have been even bigger. Even my twenty year-old self somehow knew this unconsciously. I now see that I created my own 5 person community in a music recording in order to celebrate the birth of Christ. That day, Christmas really came in the form of my own two “wise” friends who brought food and presence to the stable I had chosen over the places I had been offered at the inn.
Posted by Ron Reed at 2:11 AM