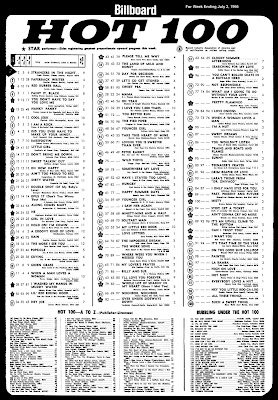 1. Strangers In The Night, Frank Sinatra

The Number One song this week, fifty years ago, was Frank Sinatra's "Strangers In The Night." To my nine-year-old ears, this is what the grown-up world sounded like. Sophisticated, sad, lush, baffling. It would be a couple more years before I started mainlining pop music, but this song was everywhere - you didn't have to listen to top forty radio to know it. Once I did get the bug, I quickly learned to despise Sinatra, and by the time I had lists for everything, Frankie was near the top of my Bottom Ten Musicians Of All Time. Until we used songs from "This Is Sinatra!" between scenes of J.P. Allen's play The Casino, and I was chagrined to realize that the guy is, in fact, pretty good.  He's now a favourite. That's the thing about growing up: some of one's prejudices relax. (Or standards erode: you be the judge).

"Strangers" is famous for Frank's sad little nod at scat singing during the fade out. "Doobie doobie doo, do do do dee ah, dah dah dah dah yaw yaw yaw..."  His heart just wasn't in it.

The pop charts were different then. Mom-And-Dad music duked it out with one-step-short-of-psychedelic rock. A Sinatra ballad slips from #2 to #1, bumping the Beatles from the top slot to second place...

Rubber Soul (December '65) and Revolver (August '66) revolutionized the Beatles' sound. This double-sided single comes between them, and would be right at home on either album.

Paperback Writer. Listen to the bass. First that gorgeous a cappella opening, into the great guitar hook (John: "Son of Daytripper"), and then just as it's finishing, a volley of high notes from Paul's Rickenbacker and the bass never stops moving. Right off the bat, it's "Forget roots and fifths, listen to THIS!" The last time that high note motif kicks in, he messes with it, it's more intricate, but it still drives. From this point on, you can cue up any Beatles record and just listen to the bass line, beginning to end, and you've got your money's worth.

Geoff Emerick, recording engineer: "Paperback Writer was the first time the bass sound had been heard in all its excitement. For a start, Paul played a different bass, a Rickenbacker. Then we boosted it further by using a loudspeaker as a microphone. We positioned it directly in front of the bass speaker."

Rain. Even more bass astonishment. But give Ringo's drumming your other ear. "My favourite piece of me is what I did on Rain. I think I just played amazing. I was into the snare and hi-hat. I think it was the first time I used this trick of starting a break by hitting the hi-hat first instead of going directly to a drum off the hi-hat. I think it's the best out of all the records I've ever made. Rain blows me away. It's out of left field. I know me and I know my playing, and then there's Rain."  And that from the most self-effacing guy ever to sit behind a drum kit.

And of course the Beatles' first ever backward tape loop, on the fade out. I don't think a pop song could get any better. Though I never heard either tune until they turned up on my cousin Neil's copy of Hey Jude / The Beatles Again, a Canadian LP released early in 1970. I figured the tunes were brand new.  Why wouldn't I?

Speaking of bass...  Bit of a fore-runner to 1968's Tighten Up, by the euphonically monikered Archie Bell & The Drells. (What's a drell?)  Peaking this week, Cool Jerk is one of those "Let's introduce the band" tunes, sort of a rocking great-grandchild to Peter And The Wolf. But it had a good beat and you could dance to it - so much so, it became a bit of a fixture in the Northern Soul scene that flourished in the late Sixties and through the Seventies in all-night Mod clubs like The Twisted Wheel in Manchester, the Blackpool Mecca and the Wigan Casino. High energy rhythm and soul singles, the more obscure the better, for amphetamine-fueled dancers copping moves from Jackie Wilson or Little Anthony & The Imperials. Check out Nick Hornby's "Juliet, Naked."

And yup, that's the Funk Brothers, of Standing In The Shadows Of Motown fame. Smokin'!!!

29. When A Man Loves A Woman, Percy Sledge
74. When A Woman Loves A Man, Esther Phillips

Back when sixties soundtracks weren't yet a cliche (but well before they became passé), The Big Chill featured Percy Sledge's monumental tear-jerker. A few years later, when such lists weren't a news stand constant to bolster sagging sales (and Rolling Stone was still a big deal, more or less), the mag published its picks for The 100 Best Singles of the Last Twenty-five Years (Sep 8, 1988) and pegged the record at #33.

"In 1965, Percy Sledge was working as a hospital orderly when his former music teacher asked him to sing at a Christmas party. He hadn't sung in years, but the gig paid fifty dollars, so Sledge agreed to do it. He made up the lyrics to When A Man Loves A Woman - the first soul song ever to hit Number One on the pop charts - onstage that night. 'I thought a girl I was dating had left me for another guy. I had a couple of Jack Daniels, and my eyes were as big as hen eggs. I was feeling light as a feather, and I just wanted to speak my mind.'"

Last week on the charts for this one, as well as Esther Phillips distaff treatment, which showed up seven weeks after Sledge's debut on April 9.


Johnny Otis signed Little Esther Phillips (surname from a gas station sign) in 1949 to tour with his California Rhythm and Blues Caravan. She had five Top Ten singles on the R&B charts in 1950, but didn't brea into the Hot 100 until 1962. A really nice cover of The Beatles And I Love Her (also gender-flipped) preceded this one in spring of '65.

She's only 31 here, but she sounds plenty older: there's a lot of miles on the odometer by this point, with a decade and a half of drug addiction and hard living behind her. She was in the room when Johnny Ace accidentally shot himself on Christmas Day, 1954, between shows at Houston's City Auditorium. "Johnny Ace had been drinking and he had this little pistol he was waving around the table." Ace pointed the gun at his girlfriend and another woman who were sitting nearby, but did not fire. "Someone said ‘Be careful with that thing…’ and he said ‘It’s okay! Gun’s not loaded… see?’ and pointed it at himself with a smile on his face and ‘Bang!’ Big Mama Thornton ran out of the dressing room yelling ‘Johnny Ace just killed himself!'"

"I was reading a magazine
And thinking of a rock and roll song
The year was nineteen fifty four
And I hadn't been playing that long
When a man came on the radio
And this is what he said
He said "I hate to break it to his fans"
But Johnny Ace is dead, yeah, yeah, yeah
Well, I really wasn't, such a Johnny Ace fan
But I felt bad all the same
So I sent away for his photograph
And I waited till it came
It came all the way from Texas
With a sad and simple face
And they signed it on the bottom
From the late great Johnny Ace, yeah, yeah, yeah.."

Three great chart debuts this week. First up, The Mamas & The Papas, who first made the Hot 100 in January of 1966 with California Dreamin'. It was still on the charts when Monday Monday debuted on April 9. It finished its run last week: this week, the utterly cheery I Saw Her Again, which would play all summer long. Three more M&P tunes would follow before the year's end.

And yup, one of the Papas was a Canadian. Just thought I'd point that out.

Chart debut #2. We forget how Herb Alpert dominated the charts in the Sixties. We think Beatles, we think Rolling Stones, we maybe think The Mamas & The Papas or Neil Diamond or Andy Kim (and yup, Andy Kim was a Canadian...), but what's with Herb Alpert? He wasn't on The Big Chill Soundtrack. Rolling Stone never listed his tunes among any of their Top 50,000 of all time. The spawn of boomers don't grow up listening to "Whipped Cream And Other Delights" at their parents' turntables. I guess time heals all wounds.

But I include Herb's tune here as a sobering reminder of the reality of the soundtrack of the Sixties. Also because the track...

...leads us to a surprising source. Work Song was composed and recorded in 1960 by Nat Adderley, legit jazz horn player and kid brother to Cannonball Adderley, of Milestones / Kind Of Blue fame. Here's a great recording featuring the two brothers alongside Yusef Lateef, Joe Zawinul, Sam Jones and Louis Hayes.

The albums of Robert Zimmerman (now a news reporter for CBC Vancouver) had pretty much all placed on the Billboard album charts, but his first single to chart was Subterranean Homesick Blues in 1965, with its follow-up (Like A Rolling Stone) rising to Number Two in summer of that year. The sixth single starts on the charts this week, one of my five or so Dylan favourites. From the landmark album Blonde On Blonde, to be released three weeks later and also including Just Like A Woman. Now THIS is the soundtrack of the Sixties...

Still...  Dylan charted fewer tunes in the Sixties than this man, who makes his first chart appearance ever on this first week of July, 1966. Still to come, Cherry Cherry and Girl You'll Be A Woman Soon (cf Fiction, Pulp) and Kentucky Woman and Brother Love's Traveling Salvation Show (I've got the 45) and Sweet Caroline and Holly Holy and a re-release of Solitary Man and...  Lots of others.  Introducing...

And don't forget to check out...