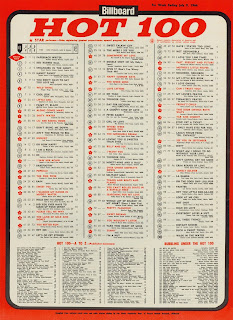 Coming in at Number Two this week fifty years ago (as Frankie slips to Number Three and the Fabs ascend to Number one) are the lads from Lafayette College in sleepy little Easton Pennsylvania. Having the year of their lives, as you can see in the video.

Last fall they got signed by none other than Brian Epstein, who changed the band's name from The Rondells – not to be confused with the Rhondells, the brass-boosted Bill Deal band who'll show up on the charts in a couple of years with terrific covers of beach music standards like May I and What Kind Of Fool Do You Think I Am). In consultation with none other than John Lennon, Brian dubs them The Cyrkle. (That's just how they spelled thynges in the Sixties...)

The band with the fresh-minted moniker got temporarily sidetracked when Tom Dawes (the guy with the double-necked guitar) started 1966 by heading out on Simon & Garfunkel's "Sounds Of Silence" tour – this week they hit Denmark and the UK. But somewhere between New Rochelle High School and the Ithaca College Gymnasium, Paul wondered if Dawes and his band might want to record an old song he had kicking around, one he'd written with a guy from The Seekers, and that set the stage for stardom. 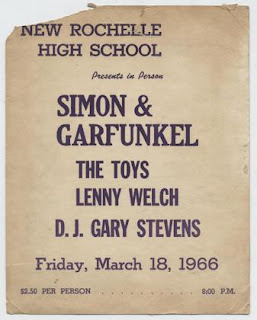 On May 25 1966 the first Cyrkle single hit the charts, and this week it peaks in the Number Two slot, right behind Brian's other band. Appropriately enough, as Cyrkle's next big adventure is to head out on tour with none other than The Beatles. (Any time you mention anyone connected with The Beatles, you have to say "none other than.") Fronting the Bravo Blitztournee in Germany, playing the first pop concert ever in Tokyo's Budokan, snubbing Imelda Marcos, apologizing for being more popular than Jesus, dodging the Klan in Memphis, and playing their last-ever public concert in San Francisco on August 29. (Who can blame them? "Them," in this case, being none other than The Beatles. The Cyrkle continued touring for some time. Without The Beatles. Which probably affected attendance figures.)

As I said, the year of their lives. As you can see in the video. Which is conveniently subtitled for the deaf and hard of hearing – which I guess means they didn't care too much about the sound quality. If you want a better-sounding video, here's a link. But this one's more fun. Note the proliferation of red rubber balls.

Yup, it's S&G all over the place. Writing songs for oddly-spelt nascent pop groups, touring high schools throughout America, and placing their own tunes on the Hot 100. I Am A Rock peaked at Number Three back in June, but now it's in its second-last week on the charts. Don't worry, the lads will be back in a month with a track from their next album, Parsley, Sage, Rosemary and Thyme.

My introduction to the earnest and iconic Sounds Of Silence album (from whence the Rock song hails) didn't come until the fall of 1969, when the new kid showed up in my Grade Eight class at Fairview Junior High. Exotic, he'd spent Grade Seven at some private school, snowshoeing in the far north. Also some kind of chess genius. Also sophisticated, music-wise; he had a big sister, who had albums.  Not just 45s.  Albums.

So one day after class I went over to Mike's house, and he put a stack of LPs on the automatic record player, and before long we were lost in conversation. About snowshoeing and chess and stuff, I guess. Maybe about sasquatches and yetis (which was the correct name for the so-called "Abominable Snowman") - eventually we would mount an ambitious Science Fair project presenting compelling evidence in support of the existence of these elusive, controversial bipeds.

Whatever the topic, we were immersed in it when abruptly my new friend lifted his hand to stop the conversation. A thoughtful pause, as though he were listening to the sounds of a distant drummer. Then... "I have tended my own garden much too long."

Holy smokes. This guy was Deep. I was blown away. I mean, what kind of Grade Eighter says things like that? I knew I was going to have to up my game in the profundity department.

I don't know how much later it was that I got my own copy of The Sounds Of Silence, and the penny dropped. Mike wasn't listening to the sounds of a distant drummer - except, I suppose, the uncredited studio drummer who was backing Paul and Artie on Side I, Track Three of Liz's copy of the first S&G LP to crack the Billboard album charts.  "Blessed are the penny rookers, cheap hookers, groovy lookers / O Lord, Why have you forsaken me? / I have tended my own garden much too long..." He was quoting, not disclosing. Still...  Not bad for an eleven-year-old. I had to wait another 47 years to learn (from Mike's pal Will) that Paul Simon himself may have been quoting, something of a pop-music rejoinder to Voltaire's Candide. And wouldn't that be just like Paul Simon. "I have my books and my poetry to protect me..."

To tear ourselves away from Simonized folk-pop profundities, let us turn our attention instead to the musical stylings of The Troggs - short for Troglodytes, one would assume. This stuff's heavy, man.

A note on the word "groovy," which was in 1966 ubiquitous.  Now, you would be forgiven for thinking that the term is strictly Sixties. But you would be mistaken.

John Ayto's 20th Century Words: The Story of New Words in English Over the Last 100 Years dates the first usage of the word circa 1937, and offers these definitions; "1) MARVELOUS, WONDERFUL, EXCELLENT. 2) HIP." The earliest recorded use I've managed to find is in the Anita O'Day / Roy Eldridge patter that leads into Gene Krupa's recording of Let Me Off Downtown from May 5, 1941;

Other non-Troggs to employ the term prior to July 9 1966 include Charles Brown, Slim Gaillard, Earl Bostic, The Hal McIntyre Orchestra, Johnny Moore's Three Blazers, Webb Pierce & His Southern Valley Boys, The Chet Baker Sextet, Bill Haley & His Comets, Red Prysock, Red Garland, Bobby Rydell, Cannonball Adderly, Joe Brown (in A Picture Of You, later covered by none other than The Beatles), Billy Abbott & The Jewels, George Kingston, George Clinton & The Parliaments, Herbie Mann, The Beach Boys, The Lovin' Spoonful, The Ric-O-Shays, Simon & Garfunkel (see Blessed, above), James Brown, The Mamas & The Papas, and... (See below; Mindbenders, The) (And for more on this and other Groovy Greats, click here)

But back to the song at hand.  One has heard few less convincing protestations of love than in Wild Thing.

"Wild thing, I think I love you.
But I wanna know for sure.
Come on and hold me tight.
I love you..."

Bit of a dumb song, but it gets at something primal. And how 'bout that crazy recorder solo? Or whatever it is. And, actually, the video's pretty awesome....

44. A Groovy Kind Of Love, The Mindbenders

Leaving the charts this week is a slow dance for the end of the sock hop, by one of England's grooviest beat groups. This one also rhymes. A lot.

The band hailed from Manchester, named for a 1963 Dirk Bogarde movie about brainwashing; A dedicated British scientist tests the possibility of brainwashing. If the experiment succeeds, he will stop loving his wife" (IMDb). 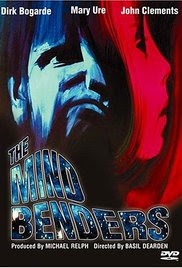 BBC, Sounds Of The Sixties: "It's an almost courtly record, with its martial snare rolls suggesting a formal dance, maybe in a tea garden." Also pretty sexy. But sweet.

"When you're close to me
I can feel your heartbeat
I can hear you breathing in my ear..."

A Groovy Kind Of Love and Wild Thing. Could there be two more opposite love songs? Not insignificant that AGKOL was written by what may have been the Sixties' only female song-writing duo, Toni Wine and Carole Bayer Sager. It was recorded by a bunch o' lads, but written by a pair o' birds, and that makes sense. Wild Thing's got a whole other thing going on. (And if I remember right, Chip Taylor thought WT was actually kind of a joke. I'll look it up when I get home and let you know.)

I always thought it was Wayne Fontana & The Mindbenders. Turns out Wayne stormed off stage in the middle of a 1965 Wembley concert, and from that time forward his name was stricken from the records. Appropriately enough.

And yup, Phil Collins covered the tune a couple decades later. But we won't mention that.

Last week on the charts for this one as well. And I'm like, what? This is still on the radio!? It sounds like it debuted in, I don't know, maybe 1963?

It actually debuted May 7, 1966, though the Chiffons did place six singles on the Hot 100 in 1963 - He's So Fine, One Fine Day, and four others you've never heard of. And really, this is one fine record. Classic Girl Group sound, but still making the Hit Parade in 1966. I do love the mashup of sounds in 1966 - from Sinatra and Alpert to Simon and Garfunkel to Troggs and Stones and Beatles to Soul to The Chiffons.

I guess there's something timeless about this record. For whatever reason it was re-issued across the pond in 1973, and made it's way back to the Top Of The Pops at #4.

83. See You In September, The Happenings

New this week, this entree in the Lovers Torn Asunder During Summer Camp oeuvre was the wistful heartfelt yearning tune for the Class of '66 - not to be confused with the perennial pop platter Sealed With A Kiss...

I do love the innocence of the tune, and the squeaky-clean video is a nostalgic treat. But reading the comments below, I'm reminded that 1966 wasn't all sunshine and lollipops. "Popular when I headed off to Viet Nam in September 1966. I didn't see my girlfriend the next September. Marine Corps tours were 13 months..." And I realize it wasn't just teenyboppers who may have found the tune poignant. More than a few of the 382,000 Americans who were drafted in 1966 may have connected with the song's sentiments.

"Bye, baby, goodbye...
Have a good time but remember
There is danger in the summer moon above
Will I see you in September
Or lose you..."