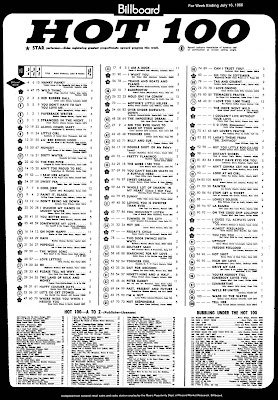 4. You Don't Have To Say You Love Me, Dusty Springfield

If you discovered Dusty Springfield in 1968 like I did, you'd know she was a Southern girl from Erskine Caldwell country. Son Of A Preacher Man had the same backwoods grit as Bobby Gentry's southern gothic masterpiece Ode To Billie Joe. But you'd know wrong. Roberta Lee Streeter was bona fide Mississippi, born and raised in Chickasaw County: Mary Isolbel Catherine Bernadette O'Brien hailed from much further north, and a ways east - Hampstead, North London, in fact.

A lot of people made that kind of mistake. Just hearing her sing, you'd easily think Dusty was black. She worshiped Aretha Franklin, her landmark LP "Dusty In Memphis" was the product of an iconic soul studio backed by seasoned rhythm and blues session players, and she was often the only white singer featured in black R&B revues. She hosted a UK program that spotlighted Motown stars.

But Dusty was white. Very white. The evening gown, the make-up, the bouffant hairdo - to look at her, you'd peg her as a Lulu or Petula Clark. And this week's #4 tune has her in full pop diva mode.

"Pop diva" - I guess that sounds dismissive. It's not meant to. As much as Springfield was a chameleon (her first incarnation was as a folkie, in The Springfields, a pop duo with her brother), there's nothing ersatz in a single moment of this, her highest-charting single ever. Or anywhere in her recorded oeuvre, as far as I'm concerned. This girl's legit.

But "diva" fits. Certainly for the operatic scope, style, emotion. Also for the melodrama that was her life. Also for her artistry, the control she wielded in the studio or theatre: completely untrained musically, she knew precisely what she wanted, what pick the bass player should use, where the microphones should be placed. She found the acoustics of the Philips Studio wanting, and recorded her vocal for You Don't Have To Say You Love Me in a stairwell. Forty-seven times.

She discovered the tune in January 1965, competing in the Italian Song Festival. Pino Donaggio stepped up to the microphone and sang Io Che Non Vivo Senza Te, and Dusty wept - though she couldn't understand a word of it.

A year later her friends Vicki Wickham (the producer of Ready Steady Go!) and Simon Napier-Bell (manager of The Yardbirds) would quickly pen lyrics over dinner and in a cab ride to a London discotheque, though they'd never written a song in their lives. The next day Springfield was in the studio (and the studio stairwell) recording it.

The original Italian version of the song was featured in the Luchino Visconti film Vaghe Stelle dell'Orsa ("Sandra Of A Thousand Delights"), that placed Claudio Cardinale in a retelling of the Electra myth that mixed incest and Italian guilt about the Holocaust. It won the Golden Lion at the Venice Film Festival. Here's a clip that gives a feel for the film: unfortunately, no Io Che Non Vivo Senza Te.

Back to Dusty. You HAVE to listen to Guess Who, the b-side of a 1964 single that never climbed higher than "Bubbling Under" status on the Billboard charts. The ominous guitar riff, the extraordinary string and horn arrangement, the Motown-ballad background vocals. And that voice. Just go ahead and tell me she's not black.

This is a song you could get obsessed with. I did.

How's this for a change of pace? From the dark romanticism of Italian film and tormented love affairs to the sunshiny summer pop of The Lovin' Spoonful.  Okay, there's some heft to Summer In The City, which debuts this week in the #53 slot and will pretty much end up the theme song of the summer of '66. It's gritty and urban the way Preacher Man is gritty and rural.

But it's the least Lovin' Spoonful of any Lovin' Spoonful tune. Too serious, too electric. That said, there's more "girlfriend pop" in the breaks, "But at night it's a different world, go out and find a girl...", and if you jump in around 1:10 you'll get a taste of the goofin' around vibe of John Sebastian and especially guitarist Zal Yanovsky (a Canadian, dontcha know? Just thought I'd point that out). "Yup, we're lip synching. Anybody see any trucks or taxis on the stage? Let alone autoharps? Who cares!" As seriously as Dusty Springfield took everything, that's exactly how seriously the Spoonful didn't take anything.

It's Billboard tag-team this week for the Greenwich Village boys - as Summer in The City shows up, Did You Ever Have To Make Up Your Mind slips out the back. It entered the charts back in early May, and held the #2 position (behind Paint It, Black - the Stones were the anti-Spoonful) for a couple weeks in mid-June.

Okay, I'll admit, the attitude toward chicks gives me the willies. Always has. Call me a feminist or call me old-fashioned, I always cringe at this stuff.

"Sometimes you really dig a girl the moment you kiss her
And then you get distracted by her older sister
When in walks her father and takes you in line
And says, You Better go home, son, and make up your mind."

That's not exactly what I would have said to the two-timing lad. (Where's my shotgun...)

But I only cringe a little. Mostly, I just want to be up there with Zal and the guys, getting a kick out of everything.

Big week for the boys. Big summer. Big couple of years. They released their first single the year before (Do You Believe In Magic), and by the end of 1966 they would have charted seven top ten tunes. In spring '67 Zal pulled a Kazan and named names (drugs, not communism) and just that quick the band started to pull apart. But they had a heck of a ride.

Big week. As well as two Spoonful singles on the Hot 100, you've got two covers of their tune Younger Girl. If you grew up on the east coast, you know The Critters' version, recorded by a bunch of Jersey Boys. (Though they don't look nearly as tough as anybody from Jersey. And they don't seem to be having as much fun as anybody from Greenwich Village.)

If you grew up on the west coast, you're partial to version by The Hondells (not to be confused with the Rondels, or the Rhondells). (Or with a real band. The Hondells consisted entirely of L.A. studio musicians, pulled together initially to cash in on the vehicular sub-genre of Beach Boys music, and now looking to get their own spoonful of pop chart cash with a John Sebastian cover.) (Not to gainsay the musicianship: the players are mostly recruited from the ranks of the Wrecking Crew, top players who graced an infinitude of California hits in the Sixties. Curiously, the lead vocalist on several Hondells tunes (including their debut, Little Honda) was Chuck Girard, who later became a fixture in the burgeoning Jesus Music scene. Gary Usher is the guy who pulled together the Crew members for any given record, and they didn't just change personnel over the years, they changed monikers, recording as The Sunsets, The Four Speeds, Gary Usher and The Usherettes (aka: The Honeys), The Competitors, The Go-Go's, The Devons, The Ghouls, The Super Stocks, The Indigos, The Revells, The Kickstands and The Knights.

Younger Girl first appeared on the Lovin' Spoonful's debut album "Do You Believe In Magic", but was never released as a single. I'll admit, theirs is my favourite version, but that may only be because it's the one I heard first - which is likely the determining factor for Critters and Hondells fans, as well. To my ears, the autoharp gives it a nice propulsive rhythm right off the top, and when they shift down into the B section the tune finds a new loping energy. The others sound a little slick (Hondells) or earnest (Critters) to my ear, and neither has the light touch of Sebastian's original vocals. But you can make up your own mind.

You can also make up your mind about the lyrics;

"A younger girl keeps rollin' 'cross my mind
And should I hang around, acting like her brother
In a few more years, they'd call us right for each other
And why? If I wait I'll just die..."

If you're in grade eleven, and she's in grade nine, maybe that's just fine. If you're as old as Gary Puckett, and the Young Girl is "just a baby in disguise," it's full-on creepy. "Better go home, son..."

One last musicological footnote about the provenance of Younger Girl. You'll read things like "The song is basically Prison Wall Blues (1930) by Cannon's Jug Stompers, with a few lyrical changes." Well, that greatly overstates the case.

"Now my head is hanging down with these prison wall blues
The white mule made me act a pop-eyed clown
Now I've got no time to lose
When they bring you through that gate
You wish you hadn't 'a done it, but it's just too late
But you might as well laugh, good partner, when you fall
Now hollerin’ won't get you from behind these walls.

"This is the first fence I ever saw in my life that I can't climb
This fence will make a high yellow girl turn dark
It’ll make a weak-eyed man go blind
When I leave these walls, I'll be running dodging trees
See the bottom of my feet so many times, you'll think I'm on my knees
These prison wall blues keep a-rollin' 'cross my mind."

Notwithstanding the possibility of prison for the Older Man in Younger Girl, there's not a lot of overlap between the two lyrics, apart from the "keep rollin' cross my mind" bit. (Which also puts me in mind of The Peppermint Trolley's Baby You Come Rollin' Cross My Mind. But that doesn't come along until 1968, so we won't head down that particular rabbit trail for a couple more years.) But musically you can definitely hear it in the bridge (0:33 "These prison wall blues keep rollin'..." etc = "A younger girl keeps rollin'..." etc), and when you get to the instrumental section around 1:01, you can sing the John Sebastian lyrics over the jug band music just as slick as a whistle.

Last word about Younger Girl. Has there ever been a better lyric than this?

"I remember her eyes, soft, dark, and brown
Said she'd never been in trouble, even in town..."

And don't forget to check out...